Artist Diana Malivani, who by her training and profession, is a Doctor of Medicine (M.D., Ph.D.), is represented by internationally reputable art galleries. Her works regularly appear in prestigious exhibitions and compete in art contests in several countries, are published in international art journals, offered for sale on leading online art marketplaces, listed by auction houses, and held in the collections of both national museums and private collectors throughout the world.

Diana Malivani was born in 1976, in the USSR, in the city of Sukhumi (Republic of Abkhazia), in the family of teachers of physics and chemistry. Graduated from N.P. Ogarev Mordovia State University (1993-2001) in Saransk, she is a Doctor of Medicine by her training and profession (M.D., Ph.D), specialized in obstetrics and gynecology. She acquired an extensive experience in sports medicine and dietology in fitness industry, with „World Class Club“ in Moscow. Also she is the author and illustrator of children’s books published in Russian, English, French and German. After many years spent in France, Diana now lives with her family in Cyprus.

Diana Malivani’s artistic oeuvre is characterised by a variety of thematic areas: flowers and still life, gardens and landscapes, animal and birds paintings, marines and abstract paintings, portraits and genre scenes, religious and Indian themes. The dominant themes of the artist's works include flowers, gardens and landscapes, created in the author's own style, combining impressionism and realism.

Malivani’s abstract compositions are grouped into several art projects: ’Seeing Music’, ’Seeing the Invisible’ etc. Almost all Malivani’s works are made in the technique of oil on canvas, mainly with a palette knife. The works, part of the art project ’The Blue Butterfly’s Dream’ (semi-abstract surrealistic compositions and woman portraiture) are characterized by a mixed technique: oil painting on fluid acrylic background and gold leaf collage.

Malivani’s artworks are held in the collections of some National Art Museums in the Russian Federation (in the cities of Sochi, Belgorod, Saransk and Novokuznetsk).

Malivani is part of the List of the Best Contemporary Russian Artists by ARTEEX, art marketplace and information platform in Russia.

Her landscape painting ’Les jardins de Giverny’ was awarded with the First Prize in the Category ’Painting - Realism’ at The Global Art Awards at Shanghai International Art Fair 2020.

Her semi-abstract painting ’Pearl Fisher’ was awarded with the Second Prize at London Art Biennale 2019, and two figurative paintings - ’Sparrows’ and ’Dance of Pink Flamingoes’ - became Finalists of The International Artist Grand Prize Competition 2020 in Taiwan.

Also Diana Malivani, with her figurative paintings ’Moments of Happiness’ and ’Snowflakes’, was among the Winners of the National all-Russia Art Contest ’Family is the Soul of Russia’, organised under the patronage of the Ministry of Culture of the Russian Federation and the Department of Culture of the Moscow Government, in 2022 and in 2021.

In 2020, more than 50 impressionistic artworks on the theme ’Flowers, Gardens & Still Life’ by Diana Malivani were selected to be exhibited in three National Art Museums in Russia, as part of her Solo Exhibition ’La Joie de Vivre’, in the cities of Sochi, Belgorod, and Saransk.

Also Malivani’s artworks have participated in several international group art exhibitions: London Art Biennale 2019, Shanghai International Art Fair 2020, Art Revolution Taipei 2020, as well as in the National all-Russia Art Contest ’Family is the Soul of Russia’ in the Museum-Reserve ’Tsaritsyno’, in 2022 and in 2021.

The Artist’s creative journey began at birth: Diana Malivani was born on the coast of the Black Sea, bathed in the riotous profusion of the colors of the Caucasus. Her love as a child for fairy tales and pictures later developed into a desire to convey, to those hearing and viewing her work, the great feeling for nature which enhances her life and the lives of those she loves.

Diana’s paintings reflect her soul, her love for music and nature, for an infinite variety of melodies and sounds, for shades and colors, for all that nature creates: the rustling of wet leaves and the first rays of dawn, the roar of the sea surf and the scent of a flowering meadow, the flight of screeching gulls and dewdrops on a blossoming rose... As she draws flowers and depicts landscapes (the principal themes of her artwork), deals with marine subjects, creates abstract compositions, and transfers music to canvas (one of the Artist’s main Art Projects bears the name «Seeing Music»), Diana strives to share these feelings with others, to share with others a part of her soul.

Diana Malivani is always in the mood to create: this happy inclination and impulse arise spontaneously within her and form an integral part of her life. Nature, for Diana, is the best source of new ideas. A walk along the Mediterranean coast, contemplation of the high crowns of the eucalyptus and palms against the background of the setting sun, and the boundless southern sky create the illusion that the surrounding world is inexhaustible and limitless: this is what fills the Artist with energy and inspiration. Diana believes that it is very important for a human being to be in harmony with self and nature. Only then is it possible to commune with all the beauty of the surrounding world, hear the murmur of the trees and flowers, be in touch with the music of waterfalls and torrential rain, and sense the breath of the sea and passing clouds.

The creative process, this special magical world in which the Artist is submerged, is invariably accompanied by music, which has always occupied an important place in Diana’s life. Listening to classical and modern music, she is transported to a special realm where different images and pictures appear, sometimes just bright splashes of colour responding to each other, which the Artist then tries to transfer to canvas. Diana’s artworks reflect the images evoked in her soul as she listens to music. The Artist believes that painting and music are interconnected by special deep inner ties having the same foundation as the diverse manifestations of life. Diana, with her background in medicine, is convinced that painting, like music, can heal spiritual wounds and help people find their own life paths. 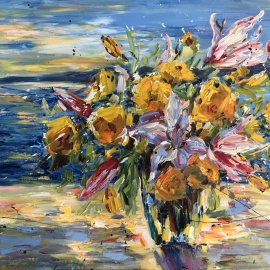 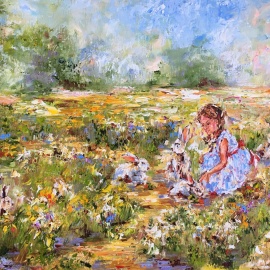 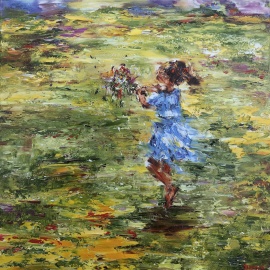 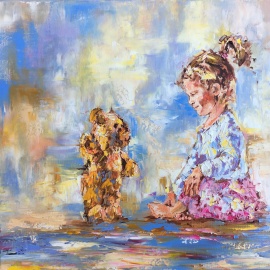 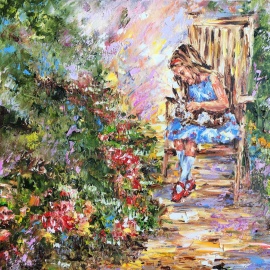 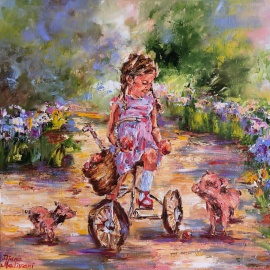 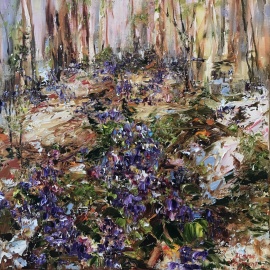 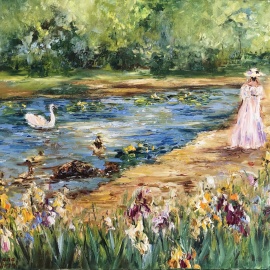 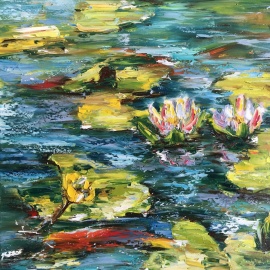 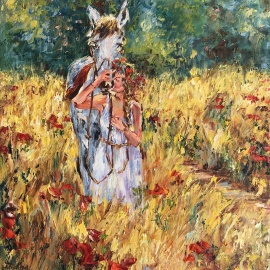 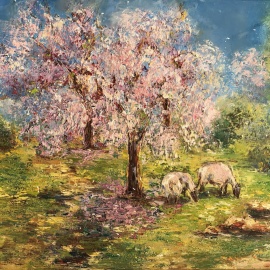 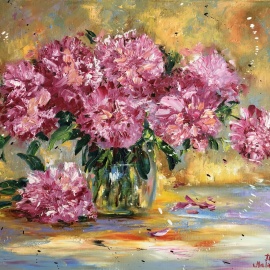 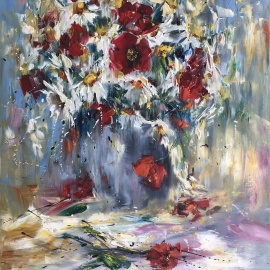 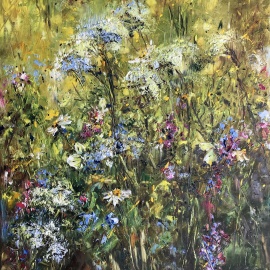 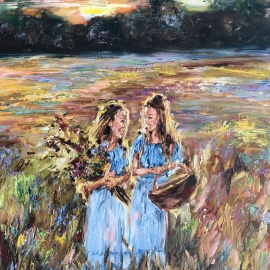 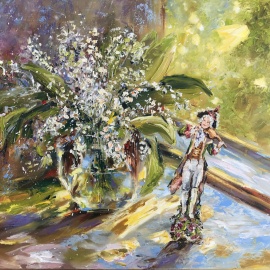