To Be Painted - New work by Ampastasia

Founded in January 2010, Amparo Latorre Romero and Anastasia Zoi Souliotou collaborated on a video piece titled
‘NO IDEA, then AMPASTASIA, then. IDEA’ where both artists filmed themselves kicking a painting in the underground ShopVille of Central Station, Zurich. It was this video installation that sparked a profound interaction of both artists’ works and explorations, and allowed their practices to evolve into Ampastasia.
Anastasia Believes strongly in investigating the interplay of time, spatial characteristics of metro stations, and creating multidimensional realities, whilst Ampa’s approach brings our attention back to the human body, the subject that undergoes the entire process and consequently experience psychological impacts and reactions.
Both artists work with various materials individually as well as the primary use of painting, then Ampastasia places Ampa’s concerns about the human figure and Anastasia’s spatial exploration together. The outcomes of the coupling are projects that generate an intensive artistic dialogue.
“As an artistic couple we comment on major artistic issues in which painting and its authors are again the 'protagonists' of our common work. Through spatial interventions and performance we promote interaction between the spectator and ourselves. Integration with public is our common purpose, which is reached through the combination of per formative scenery and a participatory performance. We are highly interested in bridging the gap between art and life. We are seeing ourselves mostly as artists-facilitators, who create the space in which public can find themselves in. “
There will be a performance aspect too; To Be Painted consisting of Ampa creating a painting in the exhibition space while she is watched from the canvas itself, where Anastasia has installed a recording camera.

This will be one exhibition you’ll have to experience and will not want to miss! 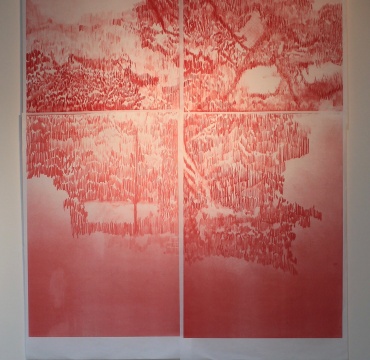