Their intention is to create phenomenological experiences, with an interest in the occult, mysticism, technology and the zeitgeist. The subject of transcendence is critical to their work and its relationship to contemporary culture. Between them they have a wide variety of works encompassing painting, sculpture, video and performance.

Here, Now and Then offers a snapshot of their practice to date. Showcasing artworks that have been produced over a long, period, where several ideas have conflated. These ideas pertain to an archaic past where myth and magic prevailed in the developing civilizations. These works also depict the current times we are in and its demise.

The landscape paintings provoke an anecdotal familiarity of scenes that are compelling but emanate a subtle sense of unease, from their absolute inescapability from the banal reality. The smaller architectural compositions, portray the fragility of civilisation where time, war and natural disaster take their toll.

The abstracted, three dimensional works play with rhythm and pattern. The animated aspects of the sculptures and their postures express a realism that contrasts with their virtual and digitised origins. The works are dependant on digital technology but are made using traditional methods, sty - listically they reference minimalism, pop art and abstraction.

The low poly structures are reminiscent of computer graphics and simulations, much like the works of Julian Opie. The surfaces of colour and shape are flattened and reduced to its minimal components.

LEGEND AND LEGACY
In 2006 after leaving university, Mark and Paul Cummings headed straight for the heart of London, settling a stone’s throw from the Square Mile. Based in the epicenter of the City they immersed themselves in technology and urban culture. They soon became a household name within the digital art scene at the time. Known as Digital Punks working under the pseudonym of AZ2Lab. Their work was showcased around the world in events and exhibitions such as Japan, South Korea, Argentina, Brazil, Germany, Italy, Spain, Poland and the UK. Meet the artists 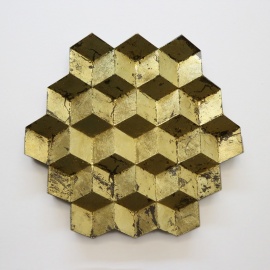