What if a modern-day explorer grew tired of the metropolis and sought out an area of wilderness in which to live? What if he built a cabin in a small patch of wasteland and lived there happily ever after...until one day when he mistakenly stepped onto a bus and was never seen again. What would be left of his existence?

The opening will showcase the artworks of each artist, as well as allowing the viewer to experience the working studio environment. Throughout the residency, the artists will create an immersive installation based around a log cabin and its contents, including paintings, drawings, photographs and a mixture of other works.

Inspired by 20th Century accounts of famous explorers and adventurers, as well as accounts published in magazines such as National Geographic, they seek to create an installation which considers a range of questions in relation to the differences between life in the metropolis and life in the wilderness.

The artists met whilst studying at City and Guilds of London Art School in Kennington, since graduating in 2013 they have been working both individually and collectively, interested in a similar range of ideas – about the construction of fictions and artifices, as well as the influence of having lived in the countryside for large periods of their lives.

Visit www.lakeisland.org for updates throughout the residency. To see the full list of artworks, please click here.

Meet the Artist | Interview with Athena Anastasiou
Read the post 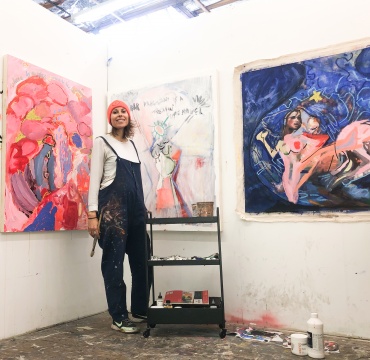